Growing up on Chicago’s West Side, Deon Lucas, AIA, and his mother would hop on the freeway, and from the back seat, he’d get a look at the enormity of Chicago’s building stock. He jokes that at that age he knew how to spell two words: Lamborghini and architect. He would draw buildings constantly, loving how it felt to translate something that was in his head onto a piece of paper. He was a kid with a mission — to become an architect, to design one of those great buildings that make up Chicago’s skyline. Today, Lucas isn’t creating any skyscrapers, but he’s still looking up — and out. His work as founder of the Chicago-based architecture collective The Beehyyve and founder of E.G. Woode, the small business development corporation and incubator, looks at development in a horizontal way. As an architect, he’s building up Chicago’s South Side, but as a businessman, he’s helping those communities build and sustain wealth and entrepreneurship.

After all those years of watching architecture from the back seat, Lucas’ mother sent him to Westinghouse High School, a school that, at that time, offered vocational classes in drafting. “It was one of the few Chicago Public Schools where you could focus your entire four years on a particular field,” Lucas said. His first job, at the age of 16, was at Smith & Smith Associates. “They had me sorting drawings and cataloging and playing with the spiders in the basement,” described Lucas. “I started to understand that if I wanted to be an architect, I needed to love all parts of it — administrative, sorting, the spiders and the glorifying parts … I wanted to fall in love with it all.”

After four years at Westinghouse in the architectural drafting program, his counselor made a recommendation: instead of going into the military, he recommended Lucas to Tuskegee University.

During his time at college, Lucas continued to work during the summer at Smith & Smith. After college he was offered a job at Skidmore, Owings and Merrill (SOM), which he initially turned down. After he returned to Smith & Smith full time, SOM continued to aggressively pursue him. “Luckily, Eben Smith, AIA, now an architect at Chicago Public Schools, was a great mentor,” Lucas said. “When I showed him my offer letter from SOM, he said, ‘If you don’t leave, I’ll fire you.’ I think he made the second best decision for me of my life at that time.”

After three years at SOM, Lucas returned to Chicago and decided to pursue an MBA. “Eben, as a mentor, told me, ‘You need to learn how to run the business of what you do.’ So I finished a dual master’s: an MBA and Master of Science in Architecture,” he said.

Lucas completed his licensure a year later and struck out on his own. Listening intently to other small firm owners, he was hearing the same complaints consistently: smaller firms couldn’t compete at the scale of the SOMs of the world. “I’m not a complaints guy, I’m a solutions guy,” stated Lucas. His solution: to create what he calls the “anti-firm,” or a collective of small practices that act as one. Named The Beehyyve, this group combines the skills of eight individual small firms, enabling them to bid on larger projects. Each of the eight “partners” are required to bring in a project bidding at $10 million to $20 million and are also allowed to continue their sole practice. The Beehyyve practice has its own license. “It’s a social enterprise created for the independent practitioner and developed to scale,” Lucas said.

Lucas was also looking to use his skills at the community scale. Taking lessons learned in business school (diversify your event attendance, go to different types of meetings — “The more boring it sounds, the better,” as he said), he began going to meetings in Englewood to hear more about small business development. He spent three years getting to know the community, volunteering his time and talents.

What Lucas found in those three years was a group of entrepreneurs applying for Neighborhood Opportunity Fund grants — money set aside by the city of Chicago to invest in local business development. Lucas gathered a group of those businesses together to apply for

funding as a collective, forming what is now E.G. Woode (a clever shortening of “Englewood”): a small business and entrepreneur organization that helps underserved communities build wealth through real estate and resource sharing.

E.G. Woode’s model secures and develops the brick and mortar space that small businesses need, then utilizes the income generated from leasing and sales to manage operations and reinvest in minority businesses throughout the country. “We’ve seen developers move into underserved neighborhoods, bringing in a lot of capital to build 20 storefronts — zero of which are actually for local entrepreneurs,” Lucas commented. “You can host as many community meetings as you want to. You can claim that they are going to have an impact, but I think communities are getting a little tired of [developers] providing the good or the service — they want to be a part of the good or the service. I think more entrepreneurs are willing to sacrifice a lot more to be a part of that system.”

As such, E.G. Woode is designed to do more than create storefronts for businesses. Explained Lucas, “Our business model is attempting to cluster small businesses and entrepreneurs together, allow them to collaborate with each other, to build up their systems, to build up their brand and to also guide them to the next phase in their development.”

Lucas is still designing buildings — with E.G. Woode, he’s responsible for much of the storefront development for the organization’s membership — but what he’s doing now is “very different” from his days at SOM. Many of his projects include workforce development housing and facilities for those who were formerly incarcerated.

One major client, the Safer Project, receives federal grants for assisting and employing those who were formerly incarcerated. That grant money is used to then subsidize the cost of design and construction, allowing for very little value engineering or sacrifices in how Lucas can spend his time. “I am able to not only participate as an architect, but they’re allowing me to be what I want it to be, which is a community-based architect,” he said.

Between The Beehyyve, E.G. Woode and his own practice as an architect, Lucas may be busy, but he’s still looking to extend his impact. He has the goal of expanding E.G. Woode to 500 entrepreneurs and small business owners in order to create a continuous supply chain of products, suppliers and more. In the same way he designed The Beehyyve to allow small architects to work at scale, he’s hoping to build E.G. Woode into a thriving, sustaining group of business owners who create dynamic business corridors that fill a gap between real estate investors and business investors.

“What’s different about our model using 500 businesses is that it’s collectively owned, and the investors get the returns that they’re seeking, not only from the real estate but from all the other services that we’ll provide from those 500 entrepreneurs, like product supply and delivery. The community develops and operates the real estate; the investors receive their returns. The goal is to work those two worlds into one,” he said.

Lucas has since been honored by the Resident Association of Greater Englewood for this enormous endeavor.

It’s a long distance between where he was before — drafting, sorting files with the spiders, working for a traditional firm — but as he discovered from his first week at Smith & Smith, he was going to love every single part about being an architect, even the parts that didn’t yet exist. 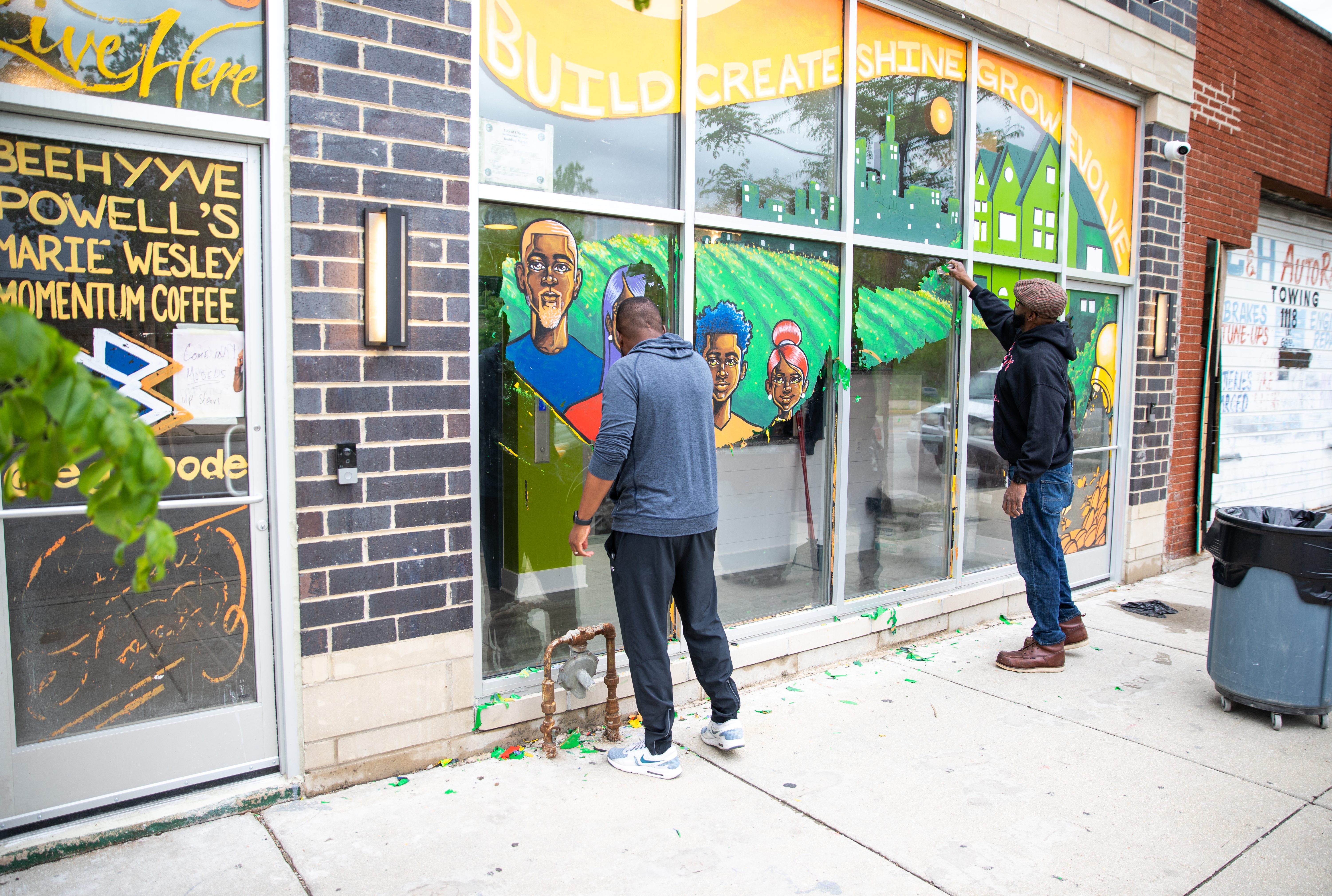